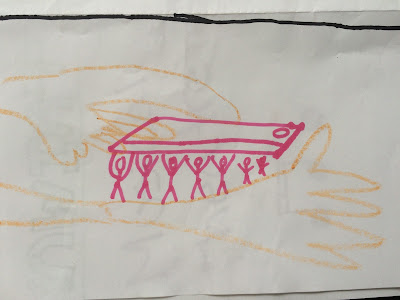 Around a month ago, Amy and I sat down with the group of new Momentum students and played a game together. These students have signed up to be mentored by adults as well as to mentor kids younger than themselves - they know it’s going to be a stretching year. The game we played was a get-to-know you game, but I wanted it to be a unique one and not surface level. The game was simple: take a blank piece of paper and on one side draw a fun or funny story and on the other side draw a significant moment in your life. We wanted to get to know these students and to hear some memories that were significant to them. Their answers did not disappoint.

We heard many stories - some positive, some not as positive. About halfway around the circle a student shared about his experience in Momentum last year. His drawing was simple, but the words that accompanied it made it powerful. He had drawn two arms with a razor blade beside them. Between the arms and the razor blade was a group of people. This group of people, he said, was Momentum.

Just last year, coming in to Momentum, this young man was thinking about ending his own life. He went on to say that if it weren’t for Momentum, he wasn’t sure he’d be here. With tears in his eyes, he described how the program turned things around for him and that because of his experience he wanted to use his life to help others.