Signs from the Homeless 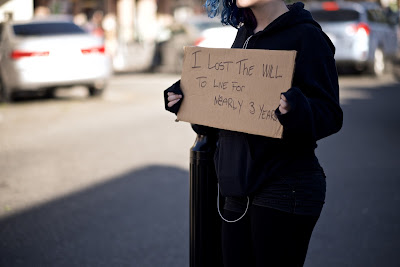 It’s an interesting thing to put your feelings on a sign and hold it up for the community to see. Their faces, the way their eyes move over your features, and then the emotions. By gods, the emotions. It was almost overwhelming; pity, shame, anger, fear. It goes on, and on, and on. It’s amazing how people think, so different from yourself.

I’m sure you’ve heard of what we’ve done, but to sum it up, we brought awareness to homeless people by writing our own signs and standing outside and letting the community take it from there.

I was standing with two of my friends, at a crosswalk. One held a sign that said “Even Our Demons Need Love,” whilst mine said “I lost the will to live for nearly three years.” It says a lot, just those small phrases, and many people reacted with contempt or irritation towards us. I’d like to say that it’s because we were standing at a crosswalk, and we did manage to block up traffic at most points, but it was because they stopped to read our signs, not because we wanted to cross. Most were initially curious, which was a thrilling feeling in itself, and some seemed to either not care at all, or they were late for an event. Understandable.

It wasn’t until our signs were read that we received all sorts of reactions; one man rode by on a bicycle and read my friend’s sign and shouted in outrage that demons needing love was a very messed up thing. He obviously didn’t quite seem to get the hidden metaphor, which was slightly
amusing. One woman approached me as cars were flying past the crosswalk. She read my sign, but struck up a conversation about how the cars didn’t seem to be stopping. She lightly gestured to what was happening, and I thought she meant about my sign. But she didn’t, because as the traffic lulled, she cut my sentence short by crossing the road. It was unnerving, but I would like to think that it’s because I’m not a very loud talker.

I found that it was mostly women who ignored my sign or read it and made a face and drove faster, and mostly those who wore thick lipstick and expensive looking sunglasses. It’s not uncommon, but very stereotypical and I didn’t expect it. A few men drove by and gave me looks of pity or sympathy and kind smiles. Most of them even slowed down to properly read my sign. It was heartwarming.
Not every female nor male stayed with this trend, a couple women slowed down to read my signs, and a bunch of men in fancy cars simply sped up. In fact, majority of the people that passed me by gave sour looks and purposely averted their gaze. It wasn’t the best of feelings, but I couldn’t really do much to change that.

This experience was enjoyable and informative, and I don’t see myself forgetting about this. I’m glad that we had the opportunity to step into someone else’s view and gain some knowledge about the signs from the homeless.

Wandering in the Desert